PROVEN TO CONTRIBUTE TO HAPPINESS AND ENHANCE ACADEMIC SUCCESS, STUDENTS ALL ACROSS THE REGION ARE MASTERING FINE ARTS.

Commonly used to reflect and record humanity, acting, music, and mixed media art are critical programs. Creating art can also improve motivation, concentration, confidence, and teamwork which helps our students live a more complete and enriching life. Despite funding challenges, school administrators are continually finding ways to continue these remarkable programs. If you are a supporter of the arts, reach out to your local school district and ask for how you can support your local school programs.

On November 18th, a group of 75 Harlandale ISD choir students in grades 6-12 and Judson High School men displayed their vocal talents at the inaugural Boys to Men Festival at the Tobin Center for the Performing Arts. The free concert, presented by the Children’s Chorus of San Antonio, featured a total of 450 male singers from across San Antonio including IlluMen, the Marcsmen, and singers from Trinity University. The young singers had prepared the music for the festival starting in early September and rehearsed at each school to gain experience. A media crew even stopped by during an entire ensemble rehearsal to film for a documentary about the festival. 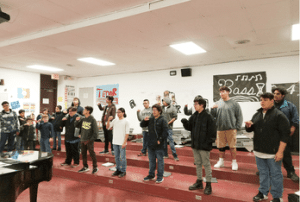 Harlandale MS and Leal MS Choir Director Sarah Arce worked with the students and was rewarded in seeing them perform the Tobin Center alongside other male singers. The concert culminated in a 400-voice choir conducted by Dr. Ryan Garrison of the CCSA, Dr. Gary Seighman of Trinity University, and Judson’s own choir director, David Short!”As singers, they put in just as much heart and dedication as any athlete out there,” she said. “It takes a lot of courage to sing in front of someone, and I hope they feel a sense of accomplishment and pride that they were able to do this.” 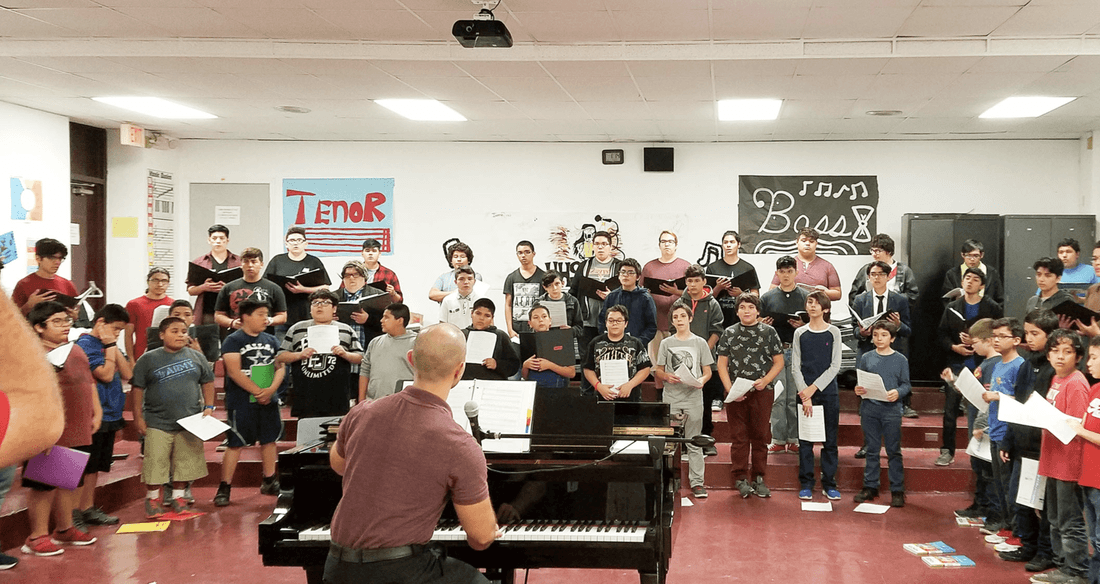 Watching this group perform proves that Jazz is thriving in San Antonio and with a young generation. The Medina Valley HS Jazz Band is an ensemble providing students with performance opportunities while enhancing their playing through the jazz medium.The ensemble performs throughout the year in Castroville and the San Antonio area. Concerts include the district’s Performing Arts Center and two San Antonio Rampage hockey games, annually. The band has received superior ratings at the St. Mary’s Fiesta Jazz Festival and was a recent recipient of the Texas Jazz Educators Association grant. They were recently invited to perform at Region 20 in San Antonio for the Family and Community Engagement Symposium. 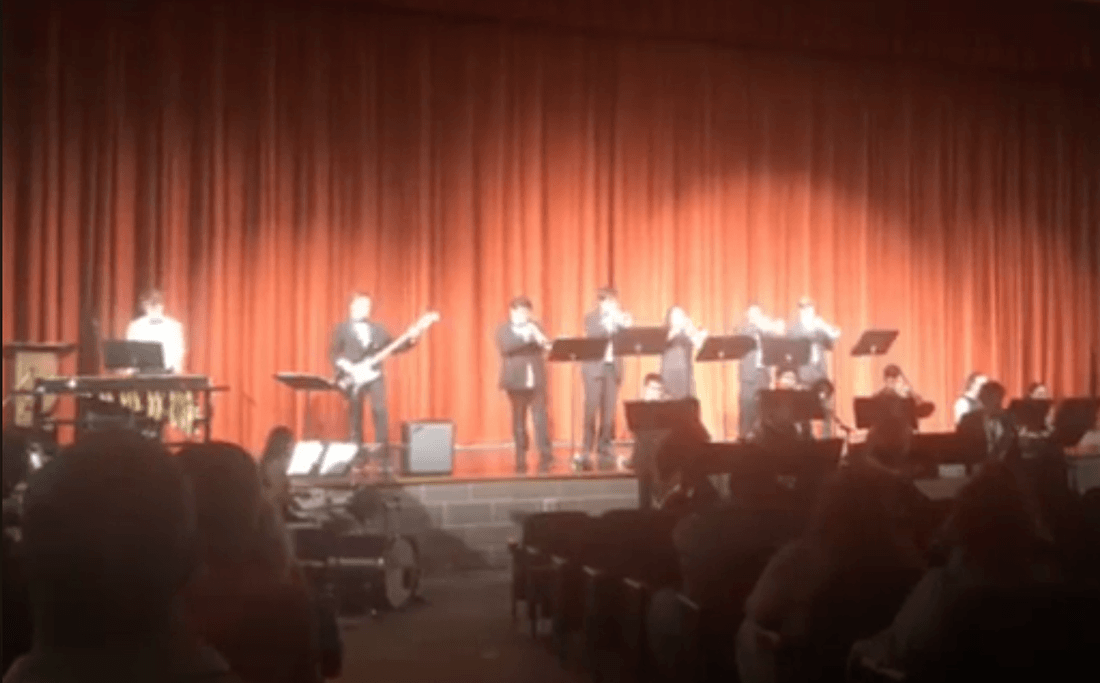 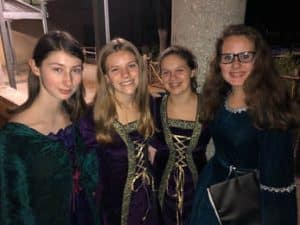 The Alamo Heights High School Choir embraced the traditions of the holidayseas
on with the Madrigal Dinner, an annual event that features a meal dividedinto courses, each heralded in song. The music, traditionally from the medieval and renaissance periods, and students dressed in period costumes, provided the perfect setting to celebrate the season. Parents volunteered their time to transform the school cafeteria into a magical castle. The event is a long-standing favorite tradition of students and audiences alike.

Twenty-one Mighty Tiger Band Members made the Region Band. Twelve of those qualified for the Area Band and will audition for the All-State Band in January.
Five students qualified for the All-Region Orchestra and perform this evening at Reagan High School in San Antonio. Congratulations to these musicians!

Twenty-one Mighty Tiger Band Members made the Region Band. Twelve of those qualified for the Area Band and will audition for the All-State Band in January.

Five students qualified for the All-Region Orchestra and perform this evening at Reagan High School in San Antonio. Congratulations to these musicians! 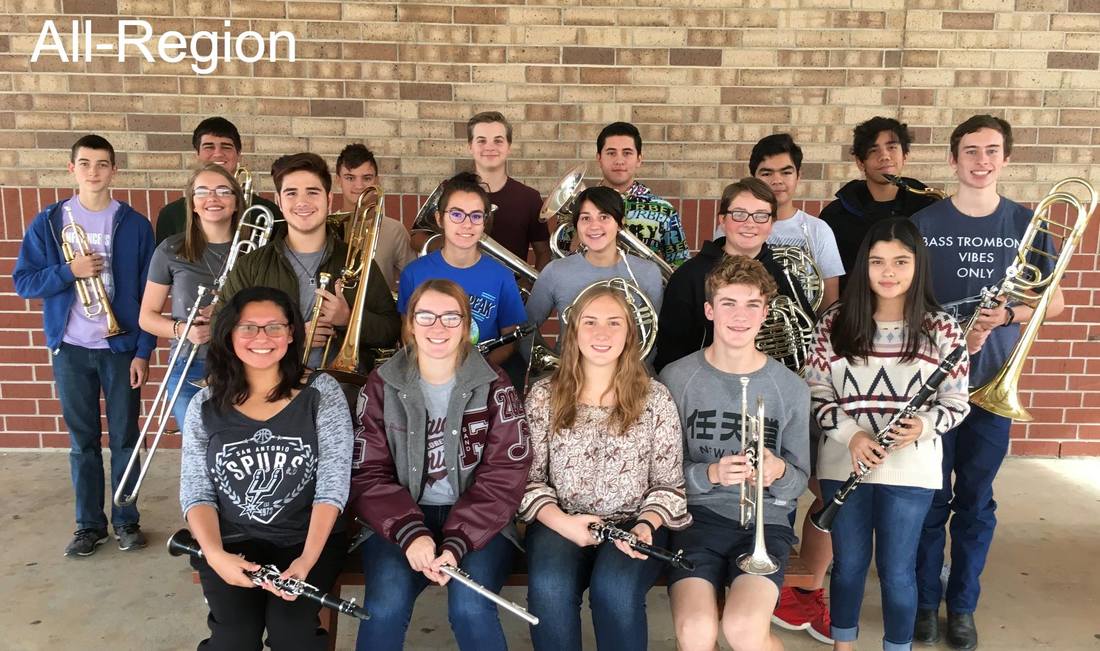 Andy Richardson attended North East School of the Arts (NESA) before he got his big break performing on Broadway. This past fall, Richardson returned to NESA to help students who were once in his shoes, and are now preparing to put on their production of Disney’s Newsies the Musical.

When Richardson was just 16 years old he auditioned for and booked the role of “Romeo” in the world premiere production of Newsies at Paper Mill Playhouse in New Jersey. One year later, Newsies transferred to Broadway, and Richardson went with them, eventually taking on the role of “Crutchie.” “I found out I got my part in Newsies in English class here during school,” said Richardson. “NESA was such a formative time for me as in fine-tuning my skills as an actor, dancer and just artist overall. It all translated so well that I felt prepared to do such a large-scale production.”

Richardson has since joined the cast of Wicked on their North American tour, serving as an ensemble member and understudy to “Boq.” Wicked ran at the Majestic Theatre in San Antonio, allowing him the time to share what he’s learned with the students at NESA. Dance director Dena Mabry taught Richardson when he was a student, and was there to welcome him back years later.
â€‹
“We are so proud to have him back,” said Mabry. “It is truly an incredible coincidence that he’s here doing Wicked on the national tour at the same time we’re preparing for the show he did on Broadway. We’re just thrilled to have him here.”

“It’s surreal knowing that I was in their places exactly like this years ago,” said Richardson. “We had guest artists then, so to kind of come full circle with a show that I got to work on is amazing. I love it.” Richardson spent three hours working with students as they get ready to perform Newsies in front of audiences in November. Even years later, Richardson says his time at NESA made a lasting impact. “The teachers, just the overall community of it is something I will always cherish and I tout to this day to all of my friends,” said Richardson.

Hundreds of fine arts students will be featured in a variety of holiday concerts and performances at elementary, middle, and high school campuses throughout Northside ISD.

Here’s a list of holiday concerts which can be sorted by campus or date. Most events are free, and all are open to the public. Happy holidays to everyone from Northside ISD!